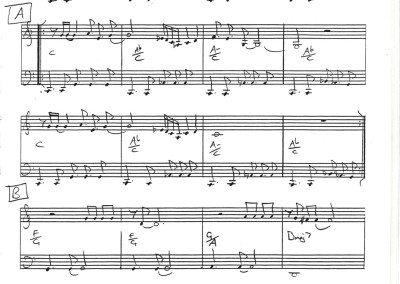 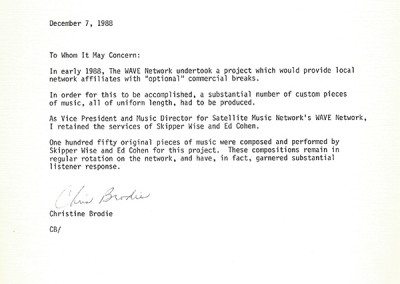 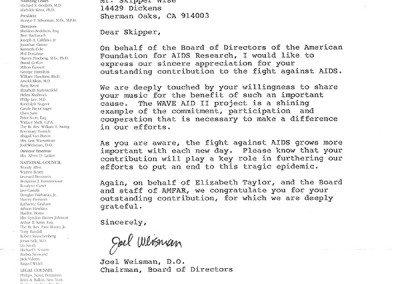 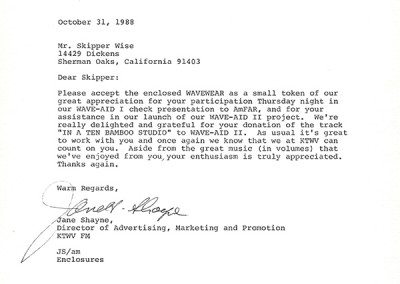 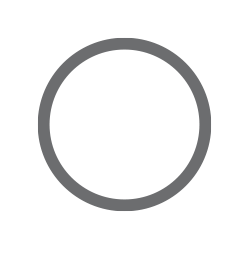 In March of 1986 one of the most challenging and satisfying phases of my music career happened next. When the Wave format radio stations first debuted, they could not find enough of signature smooth jazz tracks to feature. Ed and I were offered a unique opportunity to create 150 songs for this very purpose. Stations that signed on to the Wave format would receive Wave-branded jingles, which Ed and I participated in recording, and also a unique selection of custom songs, written by us, designed to air at the 15 minute mark each hour of their programing day. Each track was to be 3:21 in length (which we achieved by fading the song at that point).

The sessions to record these 150 songs were split in two events, with 75 songs recorded at each. The writing sessions were intense. Peter White was our copyist, working in another room as Ed and I wrote all day and night, for ten days or so. We created simple chord charts with the description of the beats and vibe, and would run a cassette of us speaking and mouthing some of the parts for each song to get us in the right mood to record. We booked “Take One Studios,” in Burbank, for the first round.

The sessions were a blast, with myself producing and Tom McCauley engineering. We had Dave Karasony on drums, Tom Tuccerione and myself on bass Derol Caraco on guitars, Tim Timmermans on percussion, Peter White on acoustic piano and guitar, Gary Meek on Sax and Flute, and Ed on electric keyboards. The quality of sound and musical improvising had us sailing through. By the end of two weeks, we had recorded all 75 songs, an incredible seven albums worth of material.

We were flabbergasted at the results. These first 75 tracks went to the Satellite Music network, and the Wave stations they were programming were thrilled. Three months later, we all assembled again at Chick Chorea’s Mad Hatter Studio in Silverlake, CA. to finish the second half of recordings.

When our tracks began to also receive listener play requests on Wave stations, we soon came to understand the advantage of knowing this information. It was like testing a movie with an audience. This was a completely new approach in the jazz formats at the time. This helped us to identify material for the next Windows record, knowing beforehand what would be considered a favorable song. But before that was to be, yet another opportunity popped up.

A Funky Distinction Polydor Japan
Listen to my Playlist