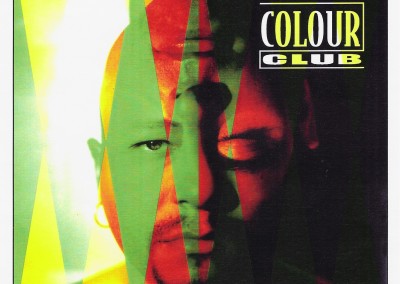 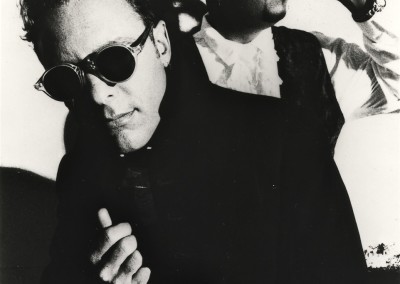 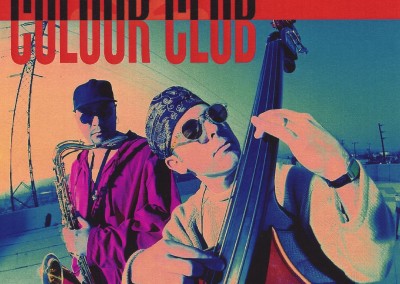 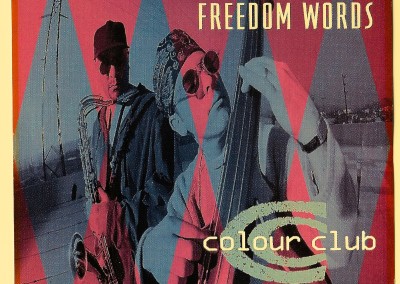 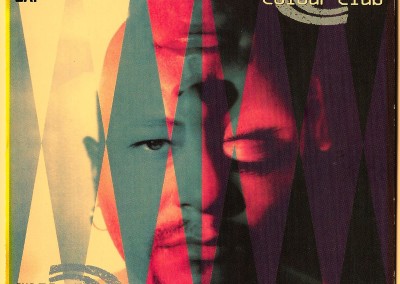 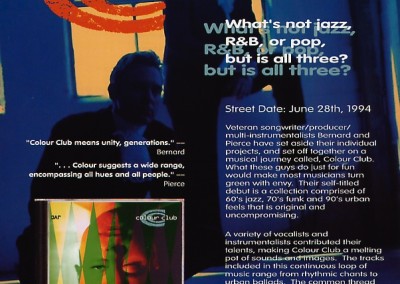 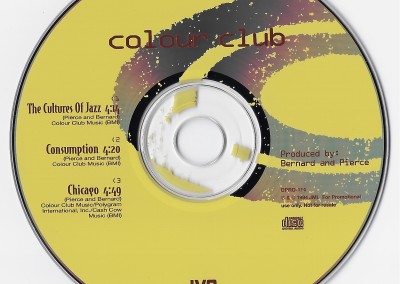 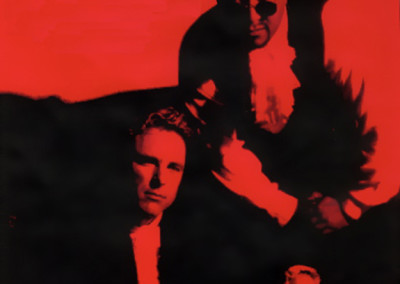 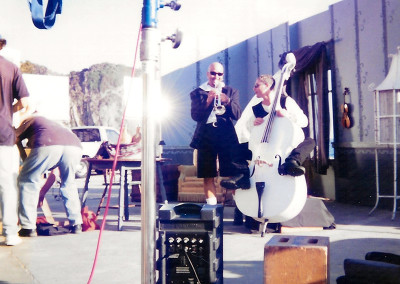 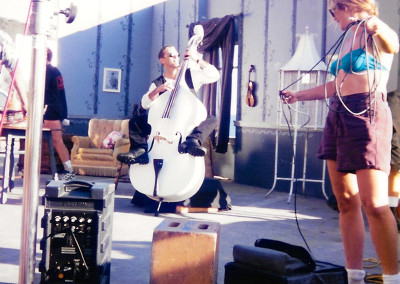 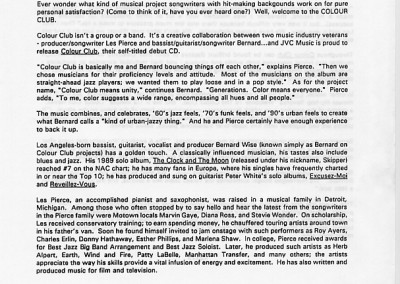 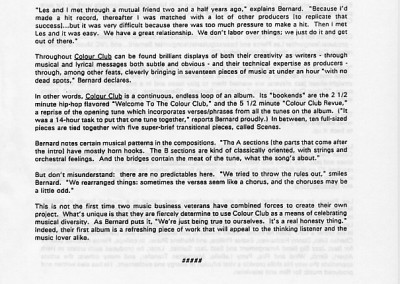 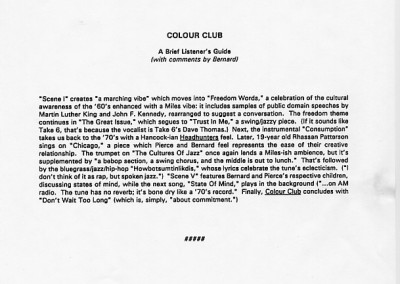 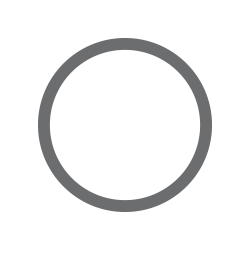 The initial group of songs I had finished with Les Pierce, which included the track “Chicago,” were circulating around our circle of musicians when I got a call one day from Lucile Hunt of Whitelight Production. Lucile, was managing a couple of jazz recording artists; Brian Bromberg, the outstanding bassist, and Tony Guerereo, the talented trumpet player. Lucile was knocked out with the songs that Les and I had recorded, and had played them to Denny Stilwell, head of A&R of JVC Records. Lucile was able to strike a deal for us with JVC, and in turn became our manager. This record deal was the largest and most adventurous ever offered to me in my career. It included promotion budgets for videos, radio, and retail, which were not part of your average NAC/Jazz type of recording deal. I was elated, as I now had a new direction, a new partner and a new manger. But most importantly, I felt inspired that what we were recording was fresh and new. A mixture of two different backgrounds, artistically and culturally, we called ourselves Colour Club.

Of all the records I had ever been involved with, this one was the most intense in the creative and working process. Once the songs were written and chosen, it was important for the album to have a unifying theme. I cannot thank Les enough for letting me push some of my ideas through. I dug deep into my past influences of artists and albums that had brought me to where I was. Inspiration for the collage of songs ending the album came from the very first Elton John record, “Empty Sky.” Vignettes connecting the songs were influenced by the very first James Taylor album on Apple Records, the self-titled release produced by Peter Asher. But most of all, the greatest influence was the Beatles “Sgt. Peppers.” The songs on our album connect endlessly throughout, with no spaces, just as the Beatles album does. I used to refer to the album as the “Black Sgt. Peppers!”

I was involved with a lot of the engineering and mixing of the album. The edits in the musical collage were all done by hand on half-inch recording tape, with a razor blade and splicing tape. Everything was recorded in analogue, for a very homogenized sonic presentation. I labored with Les for hours on this record, with his incredible talent ever present. The two of us were free to play a lot of instruments on the album. The guest vocalists gave us the opportunity to really expand. Vocal talents such as Dave Thomas (from Take Six), Rhaasan Paterson and Ronnie Martin, along with musicians such as Rick Braun, Tony Guerreo (on trumpet), Gary Meek (on sax), and John Mahon (on drums), helped us create a clear path to our new direction.

“Colour Club,”our self-titled first album, was released on JVC in early 1994. Denny Stillwell, the man who was so up on us, departed the label right before the release of the album. This was tough, as we felt we had a champion at the label who understood what we were about and on a personal level we were good friends and still hang out to this day.

In his place came in Arito Tuguchi, the successful jazz producer from JVC in Japan. Tuguchi at that time spoke about as much of the English language as the people I worked with in France on the “Play Your Guitar For Me” video. In other words, he knew how to swear, but that was it. In fact, his first three words to Les and I were exactly that. “It Sounds Fuc….” As we looked perplexed at him he repeated the same thing “It Sounds Fuc…..!” Through an interpreter, we began to realize what Tuguchi was saying. The various loops and sampled sounds we were using to create the fidelity and vibe of the record bothered him. He felt jazz was an audiophile medium, and should be meticulously recorded.

This was a prejudice we faced with the record from the very start. Nothing being played on the Jazz/N.A.C radio stations at that time resembled what Les and I had produced as an album. The fact of the matter was, our record was a leap of faith. We liked to call it “cutting edge,” but we knew it was a gamble. JVC had spent a lot of money on us, and they were getting a bit scared. We no longer had Denny in our corner, who had known exactly what we were about. So Les and I had to fend for ourselves, constantly walking the offices of JVC proclaiming It Will Be Fine, Don’t Worry, It’s great, Blah, blah, blah….

Six weeks after the release of the album, Jeff Lunt, the in-house radio guy for JVC, was celebrating. “Colour Club” reached Number 5 on the Radio & Records New Adult Contemporary charts. It was not the Number One success I had experienced with Windows or Peter White, but in all fairness to Jeff, it was a milestone. It was not an easy record to promote at all. The heavy R&B undertones and street vibe scared-off a lot radio music directors. Jeff had to work his butt off to convince them that this was the new direction of the format, and he constantly proclaimed this “acid jazz” was a new movement in Europe that they had to get hip to. Programmers started playing the record, listeners began to request it, and Jeff was able to play off this energy and convince programmers to give it a go. He was on a personal mission that benefited us greatly, and I hope he knows how much we appreciated his efforts.

The next step for JVC was to produce a video, and Michell Linden was hired to produce a dance remix of the song “Freedom Words.” The remix was Les’ idea; I knew nothing about this type of thing, and Les did this on his own. What I did was to engineer the mix the song at my studio, which yielded a sound that surprised Les because he liked it. In those days, you would get club or house mixers to create this type of vibe in the studio, as playing dance music all-night to partygoers was their medium. I remember Tuguchi coming in to the studio listening to the mix. He had progressed in the mastering of the English language. He added one more word for us proclaiming “Sound Like Fuc……. Good!

I tease him still to this day, as we sometimes see each other at the big industry trade shows like CES (Consumer Electronics Show) and AES (Audio Engineering Society). He is a master at his craft with the highly respected XRCD releases from JVC and still produces some of the finest music on this planet.

We began filming the music video in the middle of 1994 at Zuma Beach in Southern Calif. This was a familiar spot to me, as this was where I took my family when we went to the beach. (These days, I live ten minutes away in the Santa Monica Mountains, near Malibu). Les and I had a blast as we were in our element. A model (whose name I cannot recall) was called in to mimic the vocal parts recorded by Ronnie Martin. The storyboard was based on vignettes that Les and I wanted to evoke concepts of repression and freedom. Both Les and I had the opportunity to create and participate a film that well described the emotions and feelings that we put into the record. The results yielded a Video Of The Year nomination from The American Billboards Video Awards. I remember going to this event, hosted by Todd Rundgren. Les was not too interested in this party, as he always had his sights set on the big picture of pop music, and was hoping for us to be recognized by a larger medium like the Grammys, or MTV. This was Les’s background, and today is still his focused interest. To me, coming from the world of adult contemporary and smooth jazz, it was a simply a blast. These underlining views of our careers would ultimately collide as we moved forward with Colour Club.

Unreleased Albums In The Flow
Listen to my Playlist 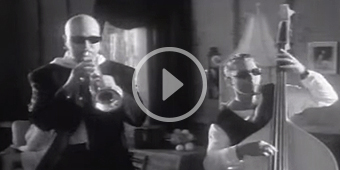